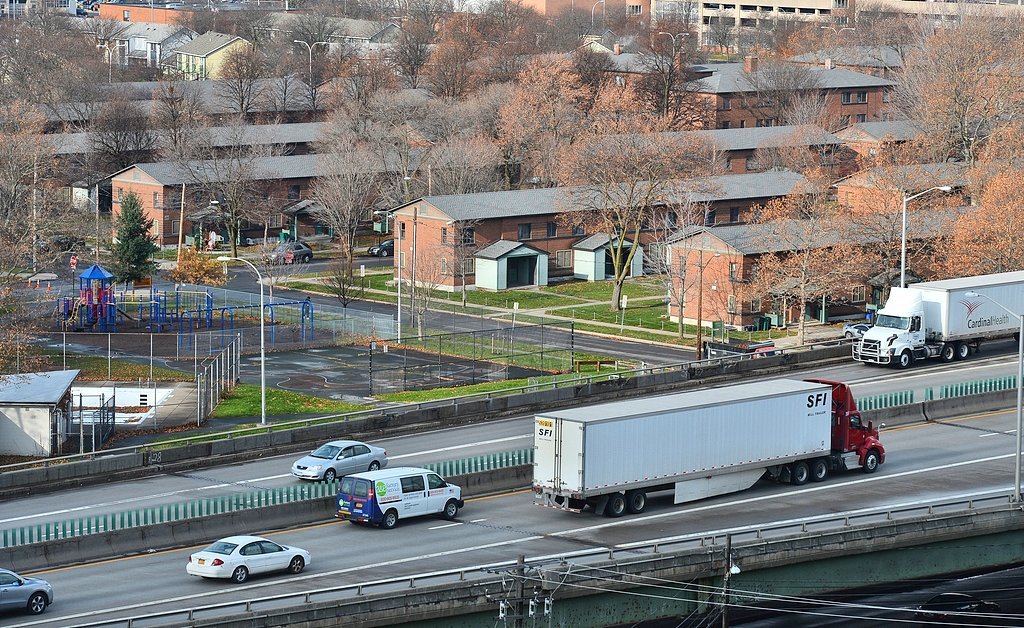 Many of those most affected by the I-81 interstate which cuts through Syracuse are those who are least aware of the options and upcoming decision about it. The following will be a description of each option as it stands now and, under that, a brief history of how it has affected Southside for those interested
Elevated Highway

One option is for the highway to be rebuilt in the same elevated way it is now. This option seems to be preferred by those in the suburbs who commute to work in the city, as it doesn’t increase their travel time. Besides the continued isolation of Southside, which would be caused by this choice, another factor to consider is that the current highway layout isn’t up to code. In some areas the highway would have to be widened to create more lanes and, in order to do this, some historical landmarks and sites would have to be destroyed.

If Syracuse goes with this option there will be no more interstate traveling through the city. The area where it once stood would be converted into city streets with new houses and businesses being constructed alongside them. This would at least remove the physical barrier marking Southside but it may lead to gentrification of the area, rising property costs and rent, and therefore forcing those who currently live there out.

The third option has been taken off the table before but is now back on (as of April 2018). It is by far the most expensive, but it would likely hold the most benefits to the Syracuse community as a whole. A tunnel would be constructed underground with the community grid option being implemented on top. This could, in theory, still lead to gentrification and those living near the entrance and exits of the tunnel may face environmental hazards, but it would remove the barrier between Southside and the rest of the city and allow those from the suburbs to still get to work without having to drive through the city.
We are currently lacking the environmental impact statement for each option of this project so, from a scientific, environmental perspective, we can’t positively promote an option. But, as for quality of life, I’d like to weigh in for the folks of Southside.

​
The current overpass option drastically influences people's lives. Air pollution from particulates rain down on people’s homes, yards, and schools. The soil is so polluted that if people want to plant food-gardens raised beds must be constructed due to heavy metals in the soils. There’s even a park with a pool and playground equipment that some parents won’t let their children use, as the pollution from the roadway causes significant health risks to those around it; especially if exercising and breathing heavily.


There’s also the problem of noise pollution, something that becomes the everyday background to people’s lives. Absolutely no soundproofing has been implemented in Southside even in areas where the highway is mere feet from people’s homes.

And, have you ever wondered why the highway was placed here? Well this document can sort that out. That’s right, it's an official city document clearly stating the areas where the interstate was placed were considered “less desirable" because “negros and jews” were living there. Sure, this was around the time of the civil rights movement but that doesn’t discount the fact the interstate was deliberately placed due to racism and a lacking of care for that community. A community that has continued to be oppressed by the Syracuse government to this day.